The UN, ISF and global policy action on sustainable production and consumption: 2002-2020

It is widely recognized that the roots of so many of our most serious environmental problems are rooted in modern society's production and consumption practices, policies and systems. This understanding was not only officially acknowledged by heads of state in Johannesburg in 2002 at the World Summit on Sustainable Development, but was identified as one of the "overarching objectives of, and essential requirements for, sustainable development". Further, government delegates agreed on the need to take action towards achieving this objective, calling for steps to "encourage and promote the development of a 10 -year framework of programmes in support of regional and national initiatives to accelerate the shift towards sustainable consumption and production". (i.e., "10YFP" in UN-language). 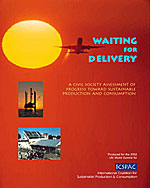 ISF then co-chaired the NGO Caucus on Sustainable Production and Consumption (SPAC Caucus) and the International Coalition for Sustainable Production and Consumption (ICSPAC), organizing discussion panels and workshops at the Summit and preparatory meetings, lobbying national delegations to support this initiative. As part of these efforts we published the report "Waiting for Delivery: An NGO Assessment of Progress".

So, what has been done since that time, given the critical nature of today's environmental and social crises?

For those of us following as well as trying to help accelerate the process, the experience has been a mixture of emotions -- hope, enthusiasm, disappointment, frustration, anger, reflection, inspiration, and determination to learn and apply what lessons have emerged over the many decades of struggle around this issue. A certain amount of patience, humor and faith is essential, considering the fact that we are ultimately dealing with the challenge of a radical transformation of the global economic system and its many national and local variations, currently dependent on fossil fuels, military spending, and an institutional acceptance of economic inequality. Clearly, changing the world's production and consumption systems is easier said than done.

It is now well beyond ten years since the 2002 call for a framework of programs to accelerate the shift. From 2003 to 2011 various UN agencies, NGOs, governments and businesses participated in what was called the "Marrakech Process" to discuss how to enact such a "framework of programs".

ISF has been engaged in the Marrakech Process from its beginning in the 2003 meeting in Marrakech, Morocco, throughout the various gatherings and debates over the decade, up until the last UN Commission on Sustainable Development session in 2011, where we distributed our follow-up report, Still Waiting for Delivery: A Review of Progress and Programs in the 10 Year Framework and the white paper "10 Steps to the 10YFP: A Suggested Navigation Guide,"

Still Waiting for Delivery, based on multiple interviews and research, provided a chronol

ogy of the discussions among policymakers, NGOs, business and others that took place at the UN over the previous decade. It also provided a list of potential programs for the framework, based on discussions and debates between civil society and UN representatives taking place during the Marrakech Process over the years.

The UN Environment Program (UNEP) was chosen to act as secretariat for the 10YFP, which in 2014 submitted its report on progress at the UN High Level Policy Political Forum. ISF also served as a member of the Multistakeholder Advisory Committee for the Sustainable Lifestyles and Education (SLE) Program as well as advocating at the UN for the inclusion of sustainable production and consumption as one of the Sustainable Development Goals, which eventually took shape as SDG 12 - Ensuring Sustainable Consumption and Production.

Today the 10YFP has undergone a public facelift, now known as the One Planet Network.

What to Read Next

Storytelling for Sustainability in Higher Education

Utopia and Dystopia in the Age of Trump

Circular Economy and the Global South

Stay Up To Date

Your donations help ISF continue its work towards the transition to sustainable communities and societies. Thank you!